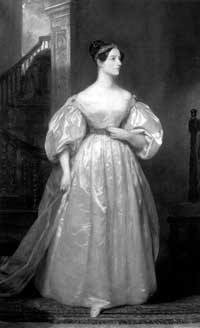 Who was Ada Lovelace?

Ada Lovelace (1815 - 1852) is one of the great heroines of the history of computing. She never invented any computers herself, but she understood Charles Babbage's dreams and wrote about them in language which the man in the street could understand. Ada had her faults: she was very impulsive, sometimes took opium and didn't know how to manage money. But without her, Charles Babbage's story would be infinitely less colourful - and much less entertaining.

If he was the father of the computer, she was the foster-mother. Read about Ada and her work and struggles in Jacquard's Web.

'We may say most aptly that the Analytical Engine weaves algebraical patterns just as the Jacquard-loom weaves flowers and leaves.'  Ada, Countess of Lovelace, 1843